‘My sister had dreams’: Mourning after school blast in Kabul | News


Kabul, Afghanistan – As soon as he heard about the explosion at the Kaj education centre, Mukhtar Modabber, 30, rushed to the blast site, desperately praying his sister was safe.

His 17-year-old sibling and soon-to-be university student Omulbanin Asghari was taking a test at the school on Friday in the Dasht-e-Barchi neighbourhood of western Kabul, a predominantly Shia Muslim area home to the minority Hazara community.

When Modabber arrived, he found his sister’s motionless body on the ground. “I could not believe my eyes,” he told Al Jazeera.

Modabber, an instructor at the centre, said Asghari, the youngest of five siblings, was a determined student who was driven to succeed.

She recently began taking lessons in taekwondo and was preparing for the Test of English as a Foreign Language.

“Ernesto Che Guevara was her favourite author and revolutionary fighter. She too wanted to be a leader in the future,” he said, adding that his sister planned to study abroad.

Packed with 300 to 400 students – girls and boys taking their practice university entrance exams – the centre was attacked by a suicide bomber.

“My sister had dreams and she wanted to work for women who have been deprived of their basic rights under the Taliban. But she is dead,” said Modabber.

The United Nations Assistance Mission in Afghanistan said on Twitter that at least 38 people were killed and 82 others wounded.

“[The] majority of casualties are girls and young women,” it said.

A survivor of the attack, student Maryam Faruz, also 17, arrived at the centre at 7am on Friday and grabbed an empty seat close to the door. She said she was working on math questions when she heard gunshots outside the room.

“Everyone stood up after we heard the gunfire. It was chaotic,” she said, her voice trembling as she recalled the attack.

Pen and paper in hand, Faruz ran and took shelter in the room next door. “We all were trying to save our lives but the attacker was quicker than some of my peers,” she said.

Minutes after the explosion, Faruz crawled her way out past the bodies of her classmates scattered across the floor.

She said there were no ambulances at the scene following the blast. “Mangled bodies were taken to a nearby mosque, and other victims were shifted to hospitals with wheelbarrows and private vehicles by locals.”

The attack drew international denunciation, with some calling on Afghanistan authorities to do more to protect minorities and bring perpetrators to justice.

“I condemn today’s horrific attack,” Richard Bennett, UN special rapporteur for Afghanistan, said in a tweet on Friday. “Onslaught on education for Hazaras and Shia must end.” 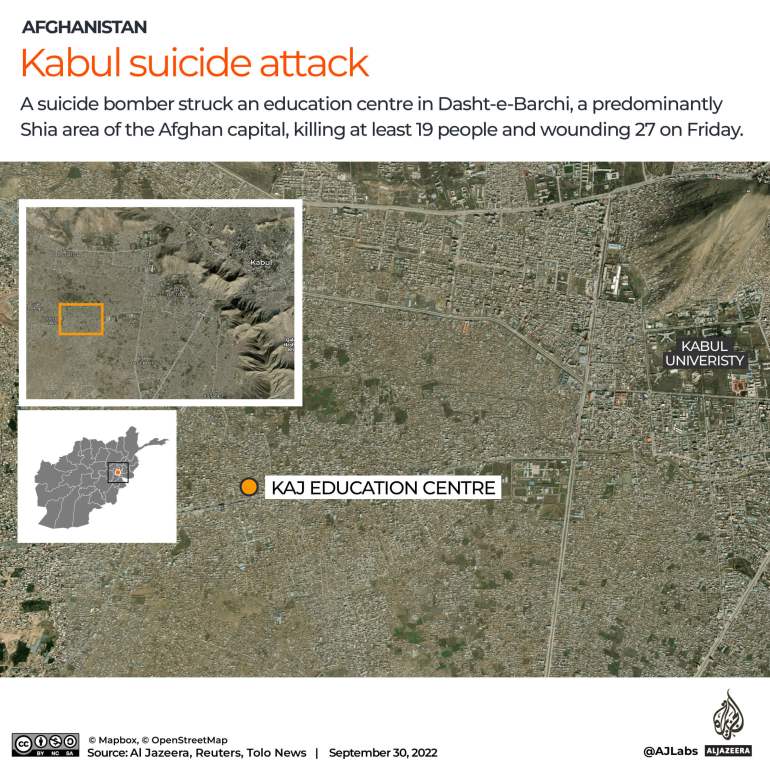 While no group has claimed responsibility, the local ISIL (ISIS) affiliate, a rival of the Taliban, has similarly attacked education centres in recent years, including a suicide attack on a school in the same neighbourhood that killed 24 in 2020.

The Kaj learning centre was the target of a similar attack in 2018 that killed 40 people and wounded 67 others. After the blast, the centre changed its name from Mawoud to Kaj and resumed educating underprivileged Hazara children.

Last month New York-based Human Rights Watch said in a report that since “the Taliban took over Afghanistan in August 2021, the Islamic State affiliate has claimed responsibility for 13 attacks against Hazaras and has been linked to at least three more, killing and injuring at least 700 people”.

“The Taliban authorities have done little to protect these communities from suicide bombings and other unlawful attacks or to provide medical care and other assistance to victims and their families,” the report said.

Addressing a gathering in Kabul on Saturday, Taliban leader and Second Deputy Prime Minister Abdul Salam Hanafi condemned the latest attack and vowed to hold the perpetrators accountable. He called it a crime against humanity and added, “there is no bigger crime than this”.

After finishing high school in the Jaghori district of Ghazni province in 2021, Faruz moved to western Kabul, where she joined her older sister, a university student.

Faruz said her father, a farmer, worked hard to save enough money for her and her sister to follow their academic dreams.

“None of my parents are educated, but they believe that getting a good education is the only way to a brighter future,” she said.

Like Faruz, most of the students at the centre moved to the Afghan capital from their villages after the Taliban banned girls above age 12 from attending school.

On Friday, as many as eight bodies were transported back to the Jaghori district, she said, adding all were female students.

Another student, Ahmad Qais Sadat, 19, who survived the attack by climbing the compound wall after hearing the gunfire, described the scene as “apocalyptic”.

He told Al Jazeera the attackers had one goal: to prevent them from accessing education.

“I am no longer [only] responsible for my own dreams. I must keep my friends’ dreams alive too,” he said.

Sadat’s words were echoed repeatedly by other students Al Jazeera talked to.

Modabber, the instructor who lost his sister in the attack, said he is more determined than ever to help his students succeed.

“I cannot give up. I must stand tall and strong,” he said. ”Not only for my sister but for girls who no longer have access to school.”