On Thursday, at the Rolex Monte-Carlo Masters, King of Clay Rafael Nadal of Spain looked brilliant, beating Grigor Dimitrov of Bulgaria 6-1, 6-1 in 55 minutes to reach the quarterfinals.

The Spaniard has won this event 11 times, including an Open-Era record of eight consecutive titles between 2005-2012.

At world No. 17, Dimitrov is the highest ranked player Nadal has beaten this year. In the past, the two have played close matches, notably at the Australian Open in 2017, where Nadal won 6-4 in the fifth.

In press, before the match, Nadal said: “We had some great matches, no? In Melbourne, of course. Have been best-of-five. The semifinals have been an emotional one. We played another great match in Beijing, another one in Shanghai with Grigor. 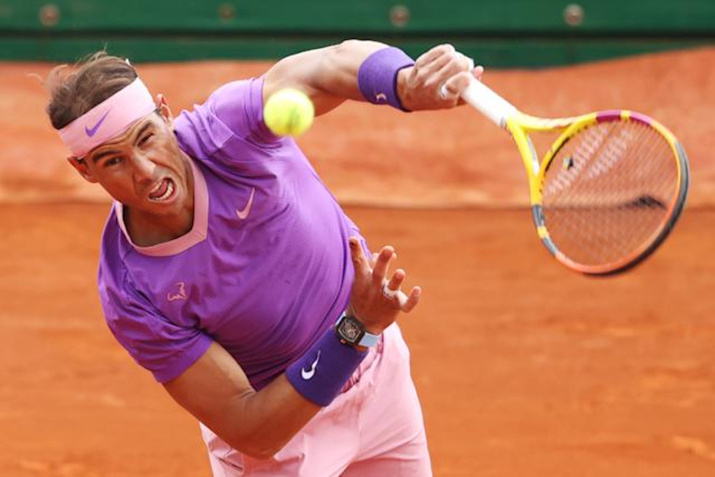 “I am just excited to play a tough match very early in the tournament.”

It turned out not to be a tough match. But, still, watching Nadal on red clay, Monte-Carlo Country Club, the center court, the steep cliffs, is a spectacular sight. And with no fans because of the pandemic, there is an even better view of the bright blue Mediterranean Sea.

Nadal, dressed in royal purple and pink, got off to a quick start, holding at love with a pair of clean forehand winners down the line.

Dimitrov got off to a slow start, with three double faults in his opening service game.

Nadal held easily for 3-love. In the fourth game, it looked like Dimitrov might turn things around with a big topspin serve and forehand winner, but then he double-faulted again and missed a forehand long, getting broken for a second time.

Nadal stayed intense and relentless. He held at love with an ace out wide and a forehand winner down the line.

Finally, at love-5, Dimitrov held, hitting the shot we are used to seeing him hit: that absolutely perfect Federer-esque one-handed backhand up-the-line winner.

At 5-1, Nadal got down love-30, but held without losing another point. It was a straightforward 27-minute set for the Spaniard. He only had four winners, but there were lots of unforced errors from Dimitrov.

In the second set, Nadal broke in the opening game. The Bulgarian was not playing with his usual creative variety with slice and drop shots. Instead, he was trying to blast through Nadal, which was not at all successful.

After he was broken for love-3, Dimitrov smashed his racquet hard on the court, got a warning, walked to the chair, and said a courteous, “Thanks.” Dimitrov folded the frame over his knee, having to brush the shrapnel away. He only won one more game in the set, holding for 1-4.

After the match, in an interview with the Tennis Channel’s Prakash Amritraj, Nadal said: “Well, I have to be honest, no, I think today I played a solid match, but I think Grigor missed much more than usual, no, so much more than what a player like him always plays.

“It’s true that today the conditions were quite difficult with windy, cold. But it’s true at the same time that he missed a lot of balls, a lot of unforced errors from him. So I did what I had to do. So happy of course to be in quarterfinals of such a very important tournament like this one. And especially for me. Tomorrow another tough test.”

Nadal will next play red-hot Russian and world No. 8 Andrey Rublev.

“Of course, it’s much better to play under the sunshine and with little bit warmer conditions, like the first couple of days of practices here, but that’s what there is today, no, so, the only thing that I can do is just adapt to the conditions, no, that’s tennis, out of tennis is like this.

“At the same time, that is something beautiful about our sport, no, that you need to adapt every single day to a different kind of conditions possible.”