The Game Changers. The Rule Breakers. The Innovators. Discover some of the fantastic emerging talent showcasing their work at The Other Art Fair.

Melanie Clemmons and Zak Loyd are both artists and educators based in Dallas, Texas. 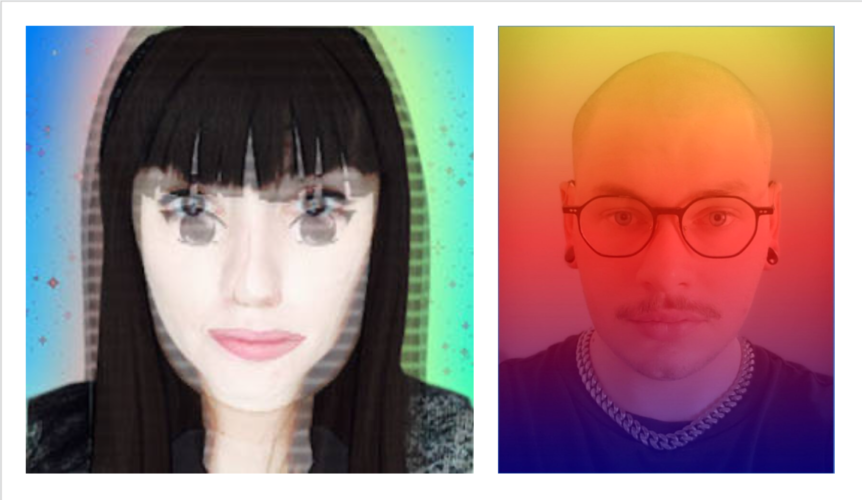 Melanie is an assistant professor of digital/hybrid media in the Meadows School of the Arts at SMU. Her work offers a reimagined use of technology toward a calmer, softer, and more careful future. Zak is visual art technician for New Media at the University of North Texas College of Visual Art and Design. He is interested in the mystical ramifications of video art histories, post-truth culture, and pop-gnosis.

The Other Art Fair Dallas Virtual Editions will launch from May 25 -30, featuring Melanie and Zak’s unique design on the website. Learn more about their practices, and inspiration behind the piece.

Q&A with the Artists

Tell us about who you are and what you do. What is your background?

Zak – I’m Zak Loyd, an artist and educator primarily working in video, performance, and installation. I am also the visual art technician for New Media at the University of North Texas College of Visual Art and Design. As an undergraduate at UT Austin, I began playing around with analog video hardware and performing live visuals for bands. Around that time, I met Melanie and we began collaborating on live visuals, video installation, and digital art. Since then, we have lived and worked in NYC, Denver/Boulder, and are now based in Dallas.

Melanie – I’m Melanie Clemmons, also an artist and educator. I originally went to school for photography but graduated during the Great Recession, and had to improvise. I worked a lot of random jobs while keeping an art practice on the side,  showing in galleries and DIY spaces as well as doing live visuals for bands and performances with Zak. Eventually we shifted into more immersive installations, both physical in galleries and museums, and virtual, on the web and in VR/XR. I’ve been teaching at SMU in Dallas, TX as an assistant professor of digital/hybrid media in the Meadows School of the Arts for the past four years.

What are the major themes you pursue in your work?

Zak – I am interested in the mystical ramifications of video art histories, post-truth culture, and pop-gnosis. I like to make people believe extraordinary things.

Melanie – I make new media artwork about the ills and joys of technology, as well as the shared space between technology, art, and magic. My work offers a reimagined use of technology toward a calmer, softer, and more careful future.

How did you first get interested in your medium and what draws you to it specifically?

Zak – As a kid, I came to know a version of the world via the glowing depths of a CRT television screen and the early web 1.0 internet. At the same time that I transitioned from a kid into an adult, TV and Internet technology transitioned from the “bulky, analog, broadcast based” to the “sleek, digital web 2.0, streaming based”. I think a lot of my work meditates on the awkwardness of this transition.

Melanie – When I graduated into the recession, I lost access to almost all resources, however I still had a laptop. I missed making physical installations so I turned to the browser space as pure potential for an installation space. In working with the web and digital technology, I am struck by being able to explore and experiment within this unique moment in human history.

How has your style and practice changed over the years?

Zak – I am both always looking forward and backward simultaneously to find tech that inspires my practice. Though the rapid pace of emergent technologies is exciting, I think it sometimes pushes some tech into obscurity before it has a chance to live. I like to seek out that newly obscure tech to inspire new work.

Melanie – Most of the stimulus for my work comes from observing internet culture and digital technology, so my practice evolves along with them, and attitudes about them. 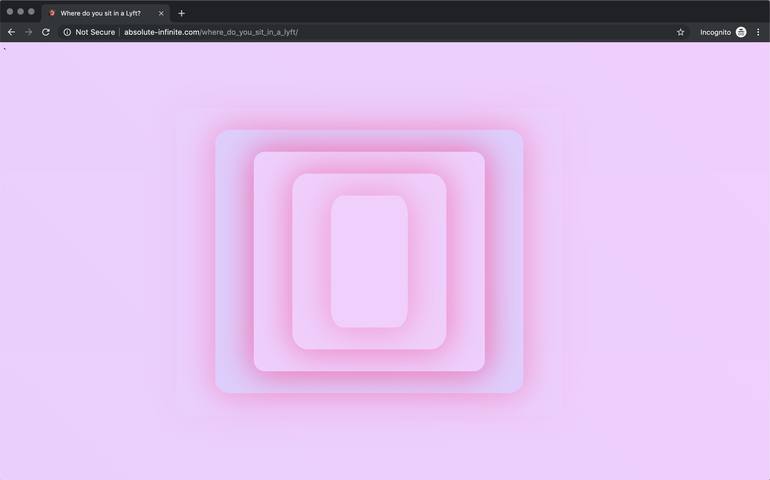 Absolute Infinite: Where do you sit in a Lyft? – Limited Edition of 10 by Melanie Clemmons

Can you walk us through your process? How long do you spend on one work? How do you know when it’s finished?

Zak – This is a tough question. Some pieces take an hour or two, some weeks, and others inhabit the archive for years before they are unearthed, edited, and finished. Really the only similarity in workflow from piece to piece is finding a chance to work in the studio.

Melanie – My process looks a lot like the Charlie from It’s Always Sunny red-string conspiracy meme, in that I am very obsessive. Once I’ve settled on a concept (after observing, consuming, absorbing all the information I can find), I’ll figure out which medium or combination of mediums are most indicative of my concept. Then I’ll go into a hole for however long it takes to finish the piece. I usually know I’m done by the looks on people’s faces when I ask them what they think about, what I realize in that moment, is the most miniscule of details.

What was your process in developing the wallpaper image for the Dallas Virtual Editions?

Melanie created an environment in the 3D game engine Unity, and added a first person character to it so Zak could ‘walk’ around the environment and capture various tableaus and scenes. We then brought those captures into the video editing program Premiere for some post-processing polishing.

What is the best advice given to you as an artist?

Melanie – Find your community, and give back to it as much as you receive from it. As a natural hermit, learning this early on from my college professor Sybil Miller has been extraordinarily helpful.

Shop artwork by Melanie, Zak and other trailblazing artists at The Other Art Fair’s Online Studios.

Introducing The Other Art Fair Online Studios, a new online platform offering art lovers around the world access to over 800 Fair artists. The Online Studios will keep our community feeling inspired, engaged, and continue to spread joy through art.

Getting To Know Maria Qamar