Indian energy demand is taking a big hit as Covid-19 runs rampant across the country. But uncertainty around when the virus wave will subside and the lack of a unified government response has left the oil industry in the dark as to how quickly consumption might pick up again.


The demand destruction over the last couple of months has been less severe than last year, when the government imposed the world’s biggest national lockdown. However, the lack of a coordinated effort to shut down activity to halt the virus’s spread will likely lead to a longer, although less pronounced, economic slump.

“When it will return to normalcy is a very difficult question to answer,” said Shrikant Madhav Vaidya, chairman of Indian Oil Corp., the country’s biggest refiner. “We can only hope and pray that with the vaccination drive underway, things will come out well. But when, I don’t know.”


Unlike last year, Prime Minister Narendra Modi hasn’t imposed a countrywide lockdown. States have been left to fend for themselves, leading to a patchwork of curfews and restrictions that are being constantly extended as record infections and deaths overwhelm hospitals and crematoriums.


“We hope the situation will be clearer by the end of this month or the first week of June,” said Mukesh Kumar Surana, chairman of Hindustan Petroleum Corp. Demand should be better in the quarter through September, he said.


Diesel and gasoline, which account for more than half of oil consumption in India, are bearing the brunt of localized lockdowns. Sales of the two fuels at the three biggest retailers are about a third lower so far in May compared with pre-virus levels two years earlier. That’s not as bad as April 2020, however, when demand nearly halved. This time round, more factories have remained open and cargo movements between states haven’t been as badly affected. 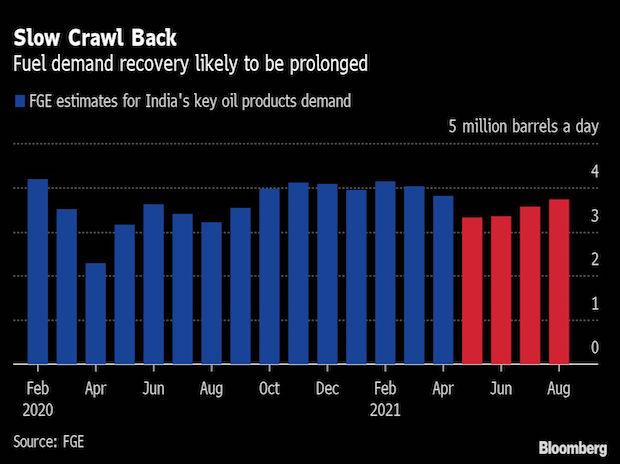 Even so, around 65% of India’s truck fleet is idle due to weak demand and a shortage of drivers, according to Naveen Kumar Gupta, secretary general of All India Motor Transport Congress. Localized restrictions are creating hurdles to truck movement and the slow progress on vaccination of drivers and a reverse migration of labor back to rural areas is really hurting the industry, he said.


Indian refiners were hoping to keep processing rates reasonably high this year, encouraged by low stockpiles and export opportunities, even as consumption dropped. May shipments of clean fuels like gasoline and diesel are set to be the highest since January 2020, according to oil analytics firm Vortexa.


However, a slowdown in construction and factory activity has led to a build-up of sulfur and bitumen stockpiles, making it more difficult to maintain operations. Crude processing fell to 4.86 million barrels per day in April, from 4.96 million in March, official data show. FGE sees run rates at 4.45 million this month, 4.6 million in June and then averaging 4.8 million over July and August.


Demand for key oil products — diesel, gasoline, LPG, naphtha, jet fuel and fuel oil — is set to drop by about 730,000 barrels per day in May from 4 million in March, the industry consultant said. June demand will be only around 30,000 barrels a day higher than this month, according to FGE.


“The regional lockdowns and periodic announcements do make it difficult to predict,” said Senthil Kumaran, head of south Asia oil at FGE, who has already revised Indian fuel demand estimates lower twice this year. “I strongly believe the impact will linger through the third quarter as well. It’s going to be very difficult for Indian oil consumption to reach March levels anytime this year.”

Business Standard has always strived hard to provide up-to-date information and commentary on developments that are of interest to you and have wider political and economic implications for the country and the world. Your encouragement and constant feedback on how to improve our offering have only made our resolve and commitment to these ideals stronger. Even during these difficult times arising out of Covid-19, we continue to remain committed to keeping you informed and updated with credible news, authoritative views and incisive commentary on topical issues of relevance.

We, however, have a request.

As we battle the economic impact of the pandemic, we need your support even more, so that we can continue to offer you more quality content. Our subscription model has seen an encouraging response from many of you, who have subscribed to our online content. More subscription to our online content can only help us achieve the goals of offering you even better and more relevant content. We believe in free, fair and credible journalism. Your support through more subscriptions can help us practise the journalism to which we are committed.

The government handouts that hand down trouble

The government handouts that hand down trouble

The art exploring the truth about how climate change began